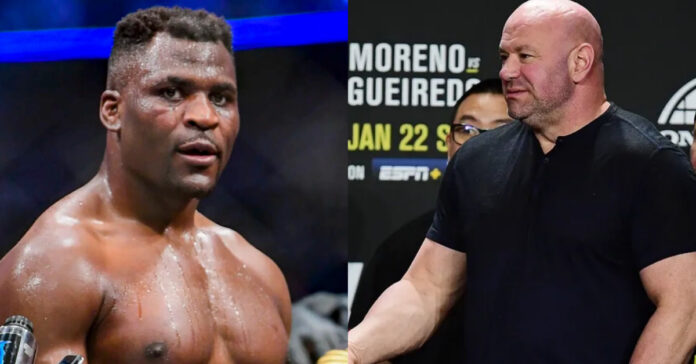 Francis Ngannou has put the UFC on blast once again, this time, mentioning the two issues he would like to see the promotion work on.

The reigning UFC heavyweight champion Francis Ngannou has been on the sidelines since his last outing against Ciryl Gane in Jan. at UFC 270. Ngannou surprised most by utilizing a grappling-heavy game plan to hand Gane the first defeat of his professional career. Following the victory, Ngannou revealed that he needed to undergo surgery after going into the bout with a major knee injury.

In an interview with MMA on Sirius XM radio, ‘The Predator’ shared his thoughts on the current state of the mixed martial arts business. He called for more advocacy for fighters due to the uneven power dynamic between the promotion and its athletes.

“We have nobody there to advocate for us, just in the room making decisions, nobody cares for the fighters, even though there are about 700 fighters in the promotion,” Ngannou said (ht MMA Fighting). “Then I think they should consider somebody to advocate for fighters, because I don’t believe they make all those decisions to harm fighters, but sometimes, they don’t just understand the fighters’ position.”

Ngannou wants the company to resolve fighter pay issues and introduce some form of health insurance for the fighters.

“If we have some sort of fighter representation in their board meetings, we will be like, ‘OK guys, you should think about fighters’ – just to remind them sometimes, it would be a little bit better. There’s a lot of things that can be changed, who can be right. The fighter pay, that’s a huge problem that everyone’s aware of, and it seems like we keep rolling like nothing is going on. The health insurance, the same problem. I would like to see some of those solved.”