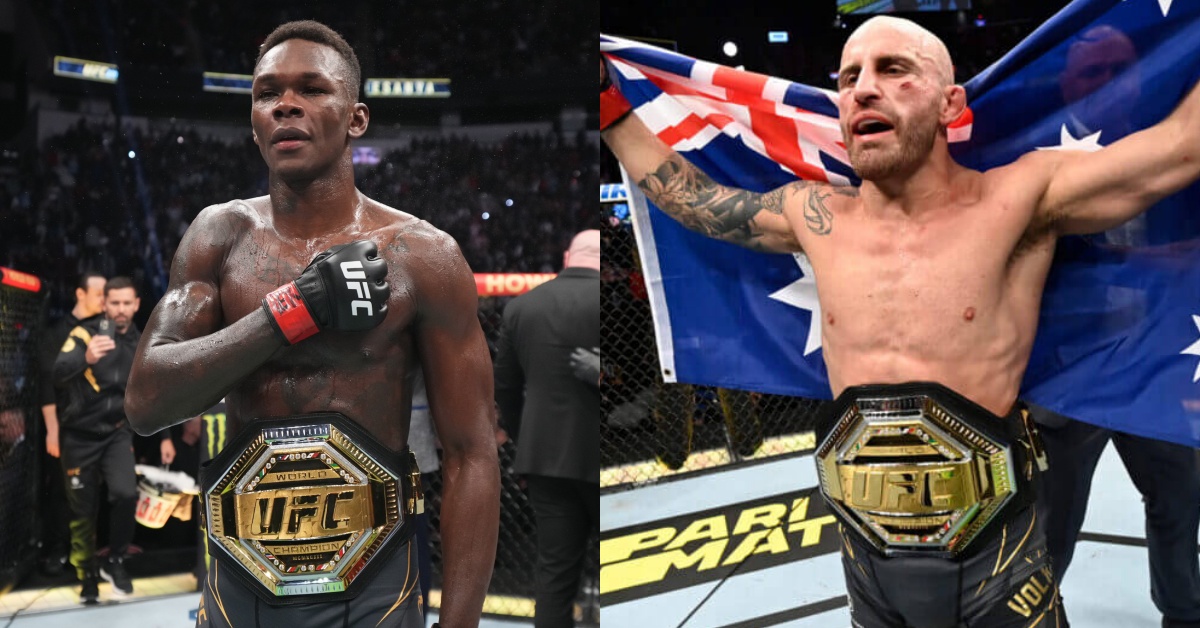 Footage has emerged of UFC champions Israel Adesanya and Alexander Volkannovski sparring ahead of their respective title fights at UFC 276 on July 3 in Las Vegas.

Roughly a month before we see Adesanya and Volkanovski defend their spot as divisional rulers, we are treated with footage of some playful sparring between the pair. Although 40lbs and a considerable height difference separate them, Volkansovski and Adesanya both manage to find success.

‘Stylebender’ will look to make his fifth straight successful title defense against the heavy-handed Jared Cannonier.

The Nigerian is coming off his successful bid against Robert Whittaker in a rematch of their 2019 fight where Adesanya decimated Whittaker to snatch his title in the second round.  This time, however, it would take the full five rounds for Adesanya to be declared the winner, defeating not just Whittaker for the second time but the clear second-best in the division.

Adesanya has hardly put a foot wrong in the UFC, capturing the title within two years of his debut and has gone on to defend it four times; effectively clearing out nearly all divisional contenders.

Across him, however, will stand Cannonier who has improved massively and produced an excellent body of work since dropping down to middleweight. The former heavyweight would make a pit five-fight pit stop at light-heavyweight, where he would face two current/former UFC champions before making the drop down to 185lbs.

The decision would prove a fruitful one, first he would KO David Branch on short notice before stopping Anderson Silva in Brazil. The ‘Killa Gorrila’ would go 3-1 in his next four, only dropping a decision to Robert Whittaker but would add jack Hermansson, Kelvin Gastelum and Derek Brunson to his resume.

Cannonier possesses lights-out power in his hands and has proven that he is a handful for anyone a middleweight.

In the bout that could finally put one of the UFC’s greatest rivalries to bed, we see Volkanvski make his fourth title defense against Max Holloway.

Volkanovski would create an upset in their first meeting, defeating Holloway in a close but fair unanimous decision. The second bout however came with much contention, after a hard-fought five-round, where Holloway would drop Volkansovski in rounds one and two, the Australian would grab a split decision to make it 2-0. The decision was met with an outcry from some claiming Holloway was the deserved winner.

Since that second bout, both men have put on stellar performances, further cementing themselves as the two best in the division. Since that fight, Holloway would defeat Yair Rodriguez and Calvin Kattar while Volkanovski would take out Brian Ortega and Chan Sung Jung.

What do you think of Israel Adesanya and Alexander Volkanovski sparring?