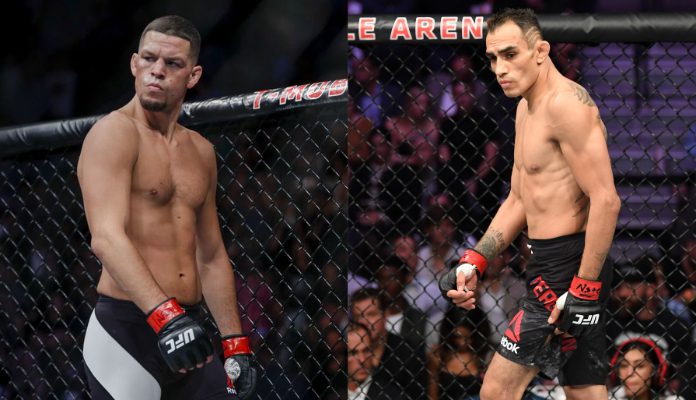 In the new main event of UFC 279, Nate Diaz will take on Tony Ferguson at welterweight. Heading into the fight, Diaz is a +110 underdog while ‘El Cucuy’ is a -130 favorite.

Ahead of the fight, BJPENN.com reached out to several pro fighters to get their prediction for the scrap. The majority of pros believe Diaz gets it done and many think this will be a much better bout than Diaz-Chiamev was going to be. Many also believe Diaz preparing for five rounds while Ferguson was preparing for three should favor the Stockton, native.

Max Griffin, UFC welterweight: I got Diaz by decision. I like him being a winner and going into free agency. It’s good for karma and for everything he’s done for the sport.

Matt Brown, UFC welterweight: Damn, that is a tough one. I’m 50/50 but lean towards Diaz because he was preparing for five rounds already.

Billy Quarantillo, UFC featherweight: I haven’t really thought about it but now that we are I’m gonna go with Tony Ferguson, and I think he grinds him out. I don’t think Nate was taking the fight seriously and Tony looked good in the first round of his last fight, he’s also done some training with Brandon Gibson and JacksonWink. Going with Tony Ferguson in a really good fight.

Sam Alvey, former UFC middleweight: I love this fight and I’m taking Tony Ferguson. I think he was ready to win and Nate looked like he was phoning it in and wasn’t training as hard.

Josh Fremd, UFC middleweight: What a crazy day, but it’s all going to work out with this matchup, probably sells more PPVs. Diaz all day. I think he wins by TKO.

Who do you think wins the UFC 279 main event between Nate Diaz and Tony Ferguson?