Home/Interviews/TTP Ep. 362 with Marcin Tybura, Adam Fugitt, and 5 Female Prospects the UFC Should Sign
Previous Next 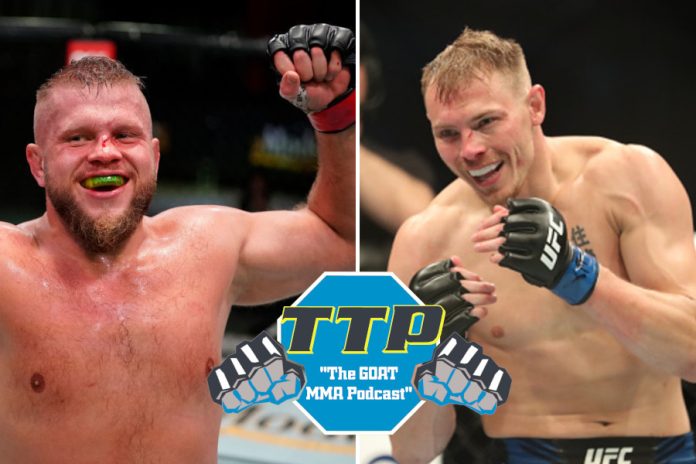 Kicking off this edition of TTP is our interview with UFC heavyweight, Marcin Tybura. Tybura shares his thoughts on all the commotion going down at heavyweight right now. Not only does she share his view of the whole situation, but he also explains what it means for him and the rest of the heavyweight hopefuls. Plus, he gets into his upcoming fight at UFC Vegas 68, where he’ll be taking on Blagoy Ivanov. It might not be a hug run up the rankings as Tybura may have been entitled to after his last big win, but he explains why he isn’t concerned about that.

The Combat Countdown: 5 Female Prospects for the UFC to Sign (18:01)

Before we get to the hustle and bustle of the UFC Vegas 68 card and Tybura’s fight, we have one more down week in the world of MMA. So in the absence of fights to break down, we’re bringing back one of our favorite segments – The Combat Countdown. This week, we’re taking a look at some of the best women in the world who aren’t already signed to a major organization. Some of these fighters are names you’ve probably never heard of. Others are highly touted prospects that may have slipped under the radar in the recent past. Whichever they are, the UFC needs to get on it and snatch them up. For this segment, all odds via FanDuel Sportsbook.

Closing out this week’s edition of TTP is an interview with UFC welterweight, Adam Fugitt. Fugitt shares thoughts about the UFC Vegas 68 card being moved to the Apex from Korea and why that may have been both a blessing and a curse. Plus, he breaks down the difficult circumstances around his debut in the UFC and why he’s excited to show a different version of himself this time.