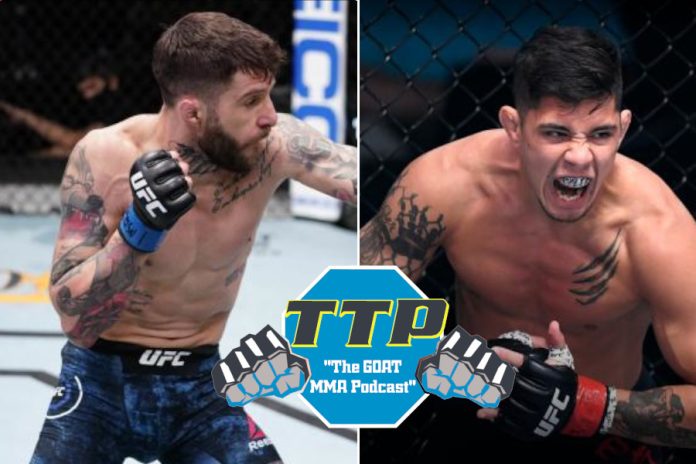 Kicking off this edition of TTP is our interview with UFC featherweight, Marcelo Rojo. Rojo has made some big changes ahead of his fight at UFC Orlando. He’s moved to Lee’s Summit, Missouri to work at Glory MMA. He’s also changed weight classes and will be fighting at 145-pounds for the first time in the UFC. He talks about all the thoughts that went behind these changes and how they’ve helped him become a better fighter. Plus, he discusses the upcoming fight with Contender Series graduate Francis Marshall, and Rojo is expecting violence in that fight.

After a down week, the UFC returns with a live show in Florida. UFC Orlando is loaded with intriguing fights with up and comers and veterans on display. The fight card is headlined by fan-favorites Kevin Holland and Stephen Thompson in a welterweight clash. The guys dig into that fight, as well as some of the top fights, to give you a thoughtful breakdown. Plus, they have an underdog and a parlay that they think will make your wallet fat this upcoming weekend. For this segment, all odds via FanDuel Sportsbook.

Closing out this week’s edition of TTP is an interview with UFC featherweight, TJ Brown. Brown isn’t fighting at UFC Orlando, but will be fighting the following weekend at UFC 282. Brown talks about the chance to fight in front of a big crowd at the T-Mobile Arena and how there is going to be a huge crowd Arkansawyers. He also discusses being given a lot of wrestle-happy opponents and whether that means anything. He’ll be breaking down the latest of those wrestle-happy opponents, Erik Silva, who is fresh off the Contender Series. All of that, plus he gives us the origin of the nickname “Downtown”.