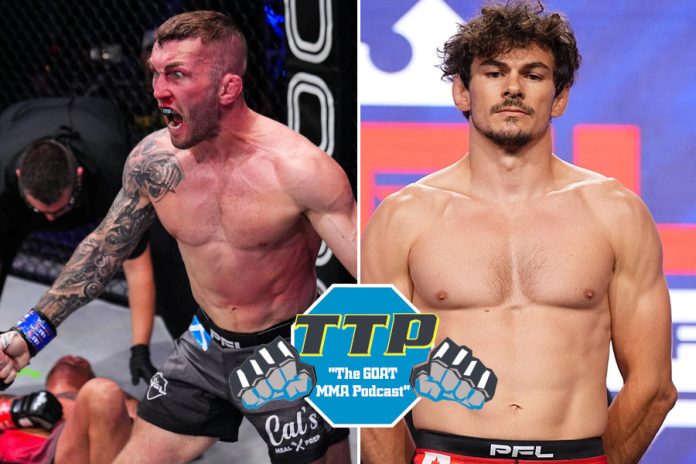 Kicking off this edition of TTP is our interview with PFL Championships finalist, Olivier Aubin-Mercier. Aubin-Mercier talks about his decision to sign with PFL in the first place and just how grueling the season has been for him both physically and mentally. With all of that in his rear view, he discusses whether this may be it for him after this season or if he’s got time for another run. Plus he shares his thoughts on running into a former training partner in the finals with a chance at a million bucks. Plus, he reluctantly answers what he’d do if he won the cash.

While the UFC may have gone away for a week, that doesn’t mean the guys don’t have picks for you. PFL has put together a banger of a card for pay-per-view and we’re diving into some of our favorite plays off of it. They’ll be breaking down three of the best and most competitive million-dollar championship fights, and also digging into a parlay and an underdog that should make your wallet fat this Friday. Don’t miss it. For this segment, all odds via FanDuel Sportsbook.

Closing out this week’s edition of TTP is an interview with PFL Championships finalist and Aubin-Mercier opponent, Stevie Ray. Ray discusses the near retirement and why he wasn’t as close to walking away as some people seem to think he was. Plus, he discusses having trained with Olivier Aubin-Mercier and whether or not that will play a factor into how this all goes down. While there’s no retirement in sight for Ray, he also discusses whether or not he’ll have it in him to continue through another tough PFL season and whether winning the cash or not will play a factor in that decision.