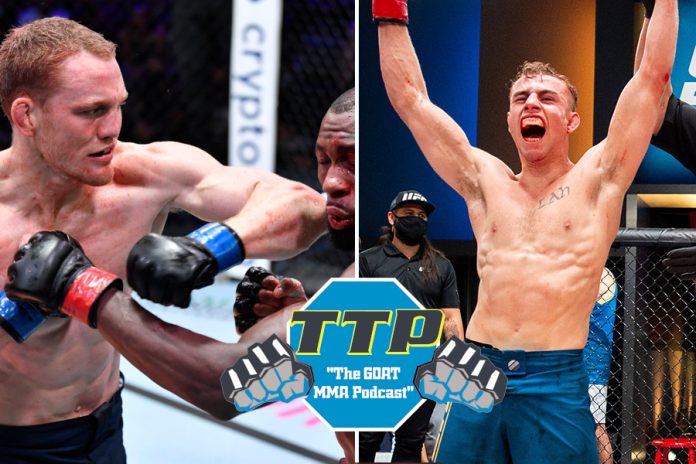 Kicking off this edition of TTP is our interview with UFC welterweight, Jack Della Maddalena. Della Maddalena discusses fighting at UFC Vegas 65 with only four week’s notice and how it was kind of his idea to do it in the first place. Plus, he discussing the upcoming UFC Perth card and his desire to be on it. In addition, he also discusses becoming a father and how that has impacted his training and his motivation heading into this fight.

After the banger of a pay-per-view last weekend, we get no breaks whatsoever. The UFC is right back to the Apex for UFC Vegas 65. Headlined by Sergey Spivak vs Derrick Lewis, this one is sure to bring plenty of action. The guys will be breaking down that fight between a pair of big boys, but also two other of our favorite fights on this card. If that’s not enough to get you to the dance, they’ve also got an underdog and a parlay that they think will make your wallet fat this weekend. Don’t miss it. For this segment, all odds via FanDuel Sportsbook.

Closing out this week’s edition of TTP is an interview with UFC bantamweight, Brady Hiestand. Hiestand discusses the knee injury that put him out of commission after his UFC debut. He also shares his thoughts on The Ultimate Fighter – both his time there and his time as a help to Team Pena. Not only is he digging into his time with everybody’s favorite reality show, he’s also talking about one of Gumby’s favorite things – fight names. Where does the nickname ‘Bam Bam’ come from? What does he think of other people having it? We get all the answers to those hard-hitting questions. Plus, he discusses his upcoming fight at UFC Vegas 65 against Fernie Garcia.