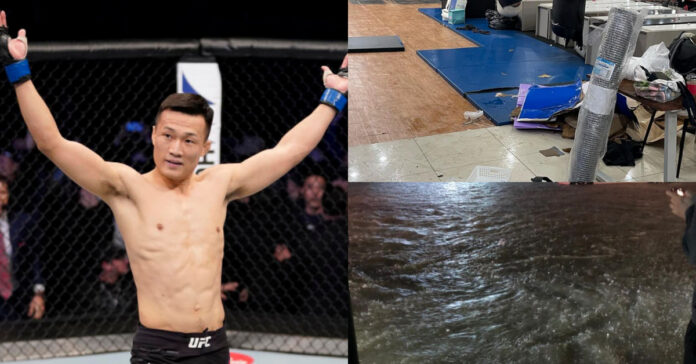 Chan Sung Jung, popularly known as ‘The Korean Zombie,’ will need to find a new spot to train, at least temporarily.

Jung last took to the octagon against the current UFC featherweight champion Alex Volkanovski in April at UFC 273. Former division title holder Max Holloway was initially lined up for Volkanovski, but Jung was found as the replacement after Holloway was forced to withdraw from the bout.

Volkanovski handily dispatched Jung in the fourth round after dominating him throughout the contest.

‘The Korean Zombie’ got back to the drawing board as he recovered from the damage sustained by his latest loss. His training will need to be put on a halt for now, as a natural mishap ruined his previous facilities. A rain storm ended up flooding his gym, which now needs to be repaired.

Jung shared the news on his Instagram account, writing: “I think I should close the gym for a while. I’ll have it restored as soon as possible. 😢 We will announce as soon as possible to operate. Thank you for your understanding.”

You can watch the video below.

It was not only Jung who suffered as the record rainfall caused deadly flooding in Seoul, killing at least eight people, according to CNN. He posted follow-up stories of the gym and it appeared that he had already started cleaning up the place. However, restoration work would remain still to get everything back in working condition.

Jung’s toughness and incredible durability made him a fan favorite. ‘The Korean Zombie’ hinted at retirement but eventually decided against it following the defeat to Volkanovski. He has been competing in the UFC for over a decade, having started his pro career in 2007 before making his debut in the promotion in 2011.