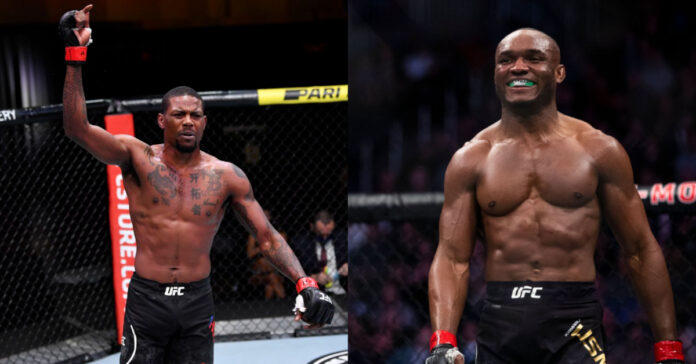 Kevin Holland has advised the former welterweight champion, Kamaru Usman, to leave the sport of Mixed Martial Arts following his crushing KO loss at the hands of Leon Edwards.

Holland himself has recently entered the welterweight division and things have gotten off to a promising start for the ‘Trailblazer’ who has gone 2-0 since making the switch to the 170-pound division. UFC 279 will see Holland return to the octagon to take on the undefeated prospect, Khamzat Chimaev, in a 180-pound catchweight bout. Originally slated to take on Daniel Rodriguez, Holland now faces a new opponent following Chimaev’s staggering weight miss which forced the UFC into reshuffling the card.

Despite stating that Usman had handled the loss well after dropping his belt to the British Edwards, Kevin Holland still believes it is in his best interest to move on from the sport as he explained at the UFC 279 media day.

“I think he has kinda got that head to him where he thought he was invincible, and I think it’s kinda hard to come back from that when you’ve been on top for so long. Kinda like Anderson Silva when he was trying to get his belt back. I just don’t really think Usman’s gonna get it back. If Leon Edwards shows up and fights the whole time like how he fought in the first and the fifth, I think he finishes Usman again.”

Despite reigning supreme inside the UFC’s welterweight division in his run-up to and time spent with the title, Holland doesn’t believe Usman will be able to return to his former self and that he may be better suited to leaving the fight game entirely.

“And if he does get the fuckin’ belt, I think that Chimaev will take the belt from him. I just don’t think Usman has what he used to have in him anymore. I think it’s movie time. I think it’s time for him to go get paid.” (Transcribed by MMANews)

It seems almost inevitable that Kamaru Usman will have the opportunity to try and exact revenge over Leon Edwards and reclaim the welterweight strap, and in doing so prove Kevin Holland wrong entirely.

However, it seems Usman may not have the first shot at Leon Edwards as the welterweight champion with rumours circulating that ‘Rocky’ will make his first defence in the UK against long-standing bitter rival Jorge Masvidal.

Do you agree with Kevin Holland’s comments on the former champion?