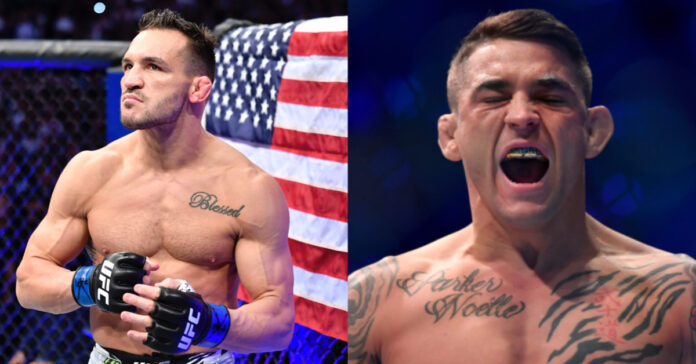 Dustin Poirier and Michael Chandler went on Daniel Cormier‘s show “DC & RC” to clear the air on why the two don’t see eye to eye with each other.

Poirier and Chandler are scheduled for a bout at UFC 281 at MSG in New York. This bout is a much anticipated fight, especially after the two got into it at a UFC event. This happened before the two were even scheduled to fight one another, but the two would end up lobbying to fight for weeks after that. They inevitably had to be separated from each other at the event, as people were afraid it would get worst than what it was.

After all of that, Cormier had to have the two on his show to clear the air and explain each other’s side of the story. For the first part of the discussion/interview, the two were singing the other’s praises. The two were reminiscing on a time they were at a Bellator event and were cool with each other at the time. Poirier claims that he doesn’t believe Chandler is how he “really is” when he is in front of a microphone and that seems to be his biggest issue with Chandler.

Chandler explained that he took offense to Poirier saying he would rather sell hot sauce, than stop inside the octagon with Chandler. Poirier thought nothing of it, claiming that he was just saying Chandler had to “earn his stripes in the UFC”.

Daniel Cormier had enough with the “kumbaya”, and doesn’t believe it after seeing the video of Michael Chandler and Dustin Poirier being separated

“No, Mike was very professional there,” Poirier said. “He kept it moving, but that was the first time I seen him in person since Abu Dhabi and since he went on record saying all this stuff. So when I saw him I wanted to tell him what I thought about him. I could have tweeted or done interviews talking about it, but I rather say it when I see him.”

At the end of the day, it just seems like the two were both riding high at different times, and talking the other one down. When Poirier had talked about Chandler, he was coming off a win against Conor McGregor and since then, Poirier has lost, while Chandler has won. Chandler chalked it up to “just being the fight game” and both walked away without hard feelings.