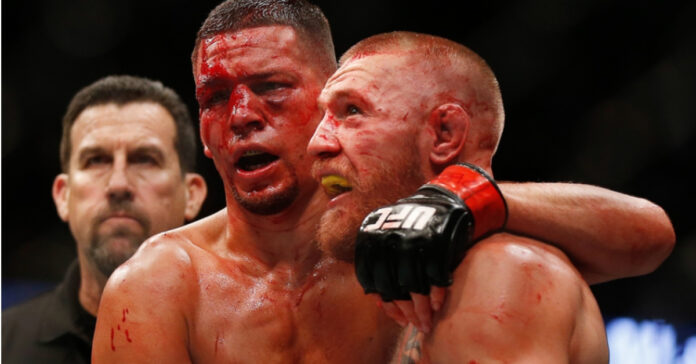 Conor McGregor has shown his respect to Nate Diaz as the Stockton-native heads into his final fight inside the UFC when he takes on Tony Ferguson later tonight in the main event of UFC 279.

The legacies of both men will forever be intertwined for the entertainment they provided during their rivalry whilst competing in the UFC. Now as it seems Diaz will fight under the promotion one final time McGregor took the opportunity to applaud his fellow competitor on what has been an illustrious career.

“Congrats Nate Diaz on making it to the end of his contractual obligations with the UFC, and as a bonafide superstar goer. An incredible feat. Fair play.

Our trilogy will happen.”

Diaz was the first man to beat Conor McGregor inside the UFC when he stunned the world by submitting the Irishmen in the 2nd round of their first matchup at UFC196. McGregor would ultimately exact his revenge when he secured a majority decision victory over his foe five months later at UFC 202. The fights themselves delivered both times, but outside of the octagon, both parties delivered even further by helping to create a massive buzz around the sport.

In what has been arguably one of the most frantic fight weeks we have ever seen, Nate Diaz will now headline UFC 279 in what fans perceive as a legends matchup when he takes on fellow promotional veteran, Tony Ferguson.

Originally slated to face the undefeated prospect, Khamzat Chimaev, that original matchup went up in smoke following the Chechen fighter missing weight by a staggering 7.5 pounds after not being medically cleared to continue cutting weight. Ferguson himself was scheduled to take on fan-favorite Li Jingliang in his return to the welterweight division but following the knowledge of Chimaev’s weight miss the UFC has opted to adjust these matchups to suit.

Now in what many believe is a much-improved card, the following matchups will take place at UFC 279.

Every other originally scheduled bout will continue as normal.

A much more fitting ending for Nate Diaz’s career inside the UFC sharing the octagon with Tony Ferguson. Just how excited are you for this new restructured main card of UFC 279?

Do you expect UFC 279 to deliver a better card following these adjustments?